Let's face it .  The post Covid world of movies is boring.  With movies like "War with Grandpa" out there ,which is so beneath it's cast that includes Robert DeNiro, Uma Thurman, and Jane Seymour. So when Mom and I watched "The Honest Thief" which is in theaters now we were thinking of more of the same.  We were wrong.

"The Honest Thief" features Liam Neeson playing "Tom".  He plays a thief who commited major robberies and decides to turn himself in when he falls in love with "Annie" played by Kate Walsh.  While coming clean to the authorities some unexpected turns happened making it a great action movie.   The cast features Robert Patrick, and Jai Courtney.

One of the best parts of the movie was that one of the characters featured as "Tazzie" who was the dog of "Agent Meyers" played by Jeffrey Donovan actually got a screen credit.

This a good action movie.  In the sea of boring film offerings it's worth a look. 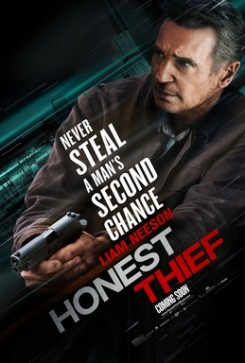