As part of our retro revue series we are reviewing one of Mom's favorite sports movies, "Invincible".   What is cool about this movie is that it based on former NFL Football player, Vince Papale.

Mark Wahlberg star's  "Vince Papale".  In the early part of the movie Vince worked as a 30 year old substitute teacher and bartender.  One of his passions was playing football with his friends.  When the Philadelphia Eagles coach, "Dick Vermeil" played by Greg Kinnear announced he was holding open tryouts for the team, Vince tried out and the rest was history.

The film shows how the odds were against Vince has worked hard to stay on the team.  Michael Rispoli plays "Max" , the owner of the bar where Vince and his friends hung out.  Elizabeth Banks plays "Janet".  Max's cousin who moved to Philadelphia from New York to work there.  The cast also includes veteran actor Kevin Conway who play's Vince's father "Frank". Michael Nouri plays "Mr. Tose", the owner of The Eagles.  Michael Kelly, Paige Turco, and Lynn Cohen round out the cast.

it's a classic film.  As strong today as when it was released in 2006.  Mark Wahlberg does a great job playing "Vince Papale".  The soundtrack to the movie is classic.  Mom really likes it.

Check this one out!! 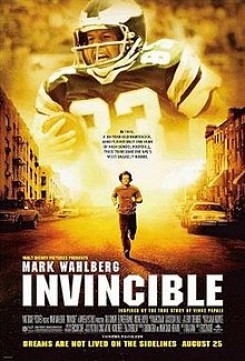