Love Actually was a movie that was released in 2003.  It, like "Chariots of Fire" is a classic.   The movie features a series of characters all dealing with Christmas.   The film starts six weeks before Christmas.

Bill Nighy gives a great performance playing aging Rockstar, "Billy Mack" who recorded Christmas single designed to reunite his career.  His relationship with his Manager, "Joe" played by Gregor Fisher is classic.  Liam Neeson plays "Daniel" who loses his wife "Joanna" during Christmas.  His relationship with his stepson, "Sam" played by Thomas Brodie-Sanger is wonderful and very touching.  Mom is amazed how Liam Neeson can handle a character who shoots everything insight and then plays warm character like Daniel.

Chiwetel Ejiofor and Kiera Knightley play newlyweds "Peter" and "Juliet".  Things get interesting when Peter's bestfriend "Mark" creats an interesting position.  Also creating an interesting situation  is "Mia" played by Heike Makatsch who was the secretary of "Harry" played by Alan Rickman who is married to "Karen" played by Emma Thompson.

One of Mom's favorite performances given by Hugh Grant, who played the "David" who was also the Prime Minister of England.  His life takes a 360 when he meets one of his staff, "Natalie" played by Martine McCutcheon.

The film features an amazing cast tied into Richard Curtis's incredible story.  Even though it is a modern movie it does not look dated.

If you want to enjoy a great holiday.  Check out "Love Actually".  Mom says it's one of her favorite movies of all time. 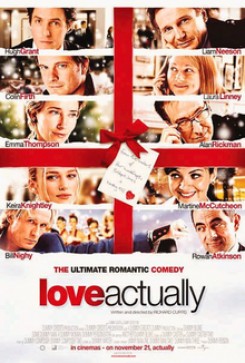