January is usually a time when there aren't alot of great movies out so when "The Little Things" was released.  So it was a real treat to discover this movie.

The film was directed by John Lee Hancock whose films include "The Blindside" and "Saving Mr.Banks".  Denzel Washington plays Kern County Deputy Sheriff Joe "Deke" Deacon who goes on assignment his old stomping ground, Los Angeles to pick up evidence for a case in his terrority.

While back in Los Angeles he gets drawn into a series of murders by a serial killer terrorizing the city.  Rami Malek plays hot shot Los Angeles Homicide Detective , "Jim Baxter".  He brings "Deke" into the case.   The prime suspect was "Albert Sparma" played Jared Leto.  I know he is a great actor but he tends to play characters that are just plain creepy.

The movie has alot of ups and downs but it is a good drama.  An even better one post covid.  There were times when it was very gritty and down right creepy but it is a good thriller.  The ending was very surprizing.

If you like drama check out "The Little Things".  It's available in theatres and HBO Max. 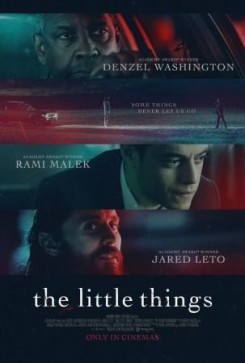