When September 11th happened there was alot anger out there against the Al-Qaeda and the forces that caused the four planes to be hit the Twin Towers and other locations.  The United States was looking for people to blame.  That is the basis of the movie "The Mauritanian" .

The film is the story of "Mohamedou Ould Slahi" played by Tahar Rahim.  After being detained for a few years he met Attorney "Nancy Hollander" played by Jodie Foster and "Teri Duncan" played by Shailene Woodley.   It was Nancy's goal to take Mohamedou as a client and fight for his release.

Benedict Cumberbatch plays Military Prosecutor "Stuart Couch" who was presenting the United States case.   As the movie played out it was clear the United States government's case was not real.  Mohamedou was tortured for eight months and the confessions he signed was under duress. 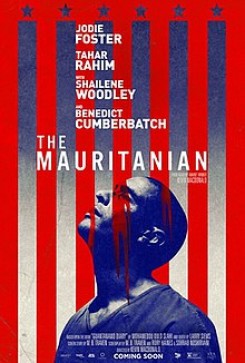