The Trial of the Chicago 7

The 1968 Democratic Convention was a very important event.  The United States involved themselves in a war with a small country called "Vietnam". Younger men were drafted into the armed services.  They did not volunteer.

To protest "the draft" groups of young people including "Students for Democratic Society" gathered together to protest at the Democratic Convention.   This resulted in the group was indicted for violating the Rap Brown law, which had been tagged onto the Civil Rights Bill earlier that year by conservative senators. The law made it illegal to cross state lines in order to riot or to conspire to use interstate commerce to incite rioting.

Defending the group was "Attorney William Kunstler" brilliantly played by Mark Rylance and "Attorney Leonard Weinglass" played by Ben Shenkman who both had to deal with Judge Hoffman's numerous contempt of court charges.

The film depicts how the trial ended up being joke of democracy to the point that the prosecuting Attorney Ben Schultz played by Joseph Gordon-Levitt was amazed of how the trial .

The cast of the film includes Michael Keaton who plays former Attorney General Ramsey Clark,  Mom thought it was funny when there was a scene where Eddie Remayne playing "Tom Hayden" speaks to "Ramsey Clark" at his home.  Michael Keaton lost the Best Actor Oscar to him in 2015 when Eddie Redmayne won for "The Theory of Everything".

All in all "The Trial of The Chicago Seven" is a great movie with great performances.  It's nominated for six Academy Awards including Sacha Baron Cohen being nominated for Best Supporting Actor for his performance as "Abbie Hoffman".  It's also up for Best Picture and Best Original Screenplay.

"The Return of The Chicago Seven" is available on "Netflix" and possibly a theater near you. 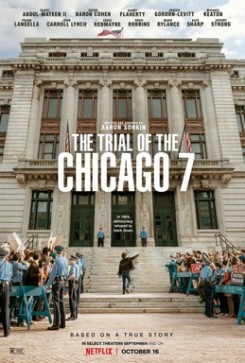