Is there is one type of movie Mom loves it is science fiction.  She also loves a good drama.  When we started watching "Voyagers" she was excited.  It is directed by Neil Burger whose films include "Divergent", "The Illusionist" and "The Upside".

The cast includes Colin Farrell  who plays "Richard" and Tye Sheridan who plays "Christopher".  The story follows a group of young people who were breed to colonize a planet so that people from Earth could have a new place to call home.

This movie had all of the elements to be an enjoyable movie it turned out to be boring.  All of the adults were lifeless.  The journey to the BORING.

"Richard" is the adult who is supervising this group of young people on their space ship. Instead of capturing the feel of a space journey in great movies like"The Martian" or any of The Alien movies this movie had no life.

I would save your money and go see "Godzilla vs.King Kong". 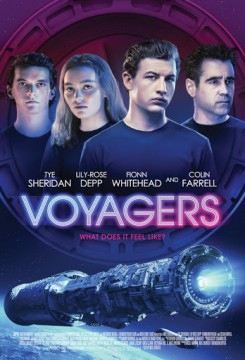