Walt Disney always comes up with formulas to make their movies work.  One formula is to take an animated film and turn it into a live action movie.  This has worked for "The Lion King", "Mulan" and 101 Dalmations.

From  "101 Dalmations" came "Cruella", the story of the origins of villianess  "Cruela Da Vil".  The film shows how "Cruella" played by Emma Stone grew up and then ending up in London joined forces with "Jasper" played by Joel Fry and  "Horace" played by Paul Walter Hauser.

One the things I liked is that "Horace" and "Cruella" had dogs who helped them in their work.

In addition to playing "Cruella" Emma Stone also played "Estella" who worked as a cleaning person at a upscale London fashion shop.  After a poor attempt of designing a window she ended up becoming a young fashion designer for "The Baroness", one of the hottest fashion designers in London.

After learning about the truth of her Mother "Cruella" decided to turn the tables on "The Baroness".  Much of the film showed their rivalry with some very fun visual displays.  At the heart of this were "The Baroness's dalmations".

Mom thought the soundtrack was great fun too filled with British hits of the 1970's.  All in all it was a fun movie.  The cast includes Mark Strong.

"Cruella" is a fun and stylistic movie. 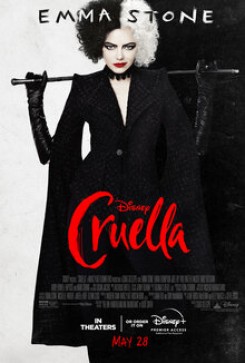