Black Widow is a movie that has been on the shelf for over a year. It is an amazing movie because it tells the story "Natasha Romonoff/The Black Widow". The movie takes us to Natasha's early years and how everything began.

The movie took us from Ohio where "Natasha" played by Ever Anderson and later by Scarlett Johansson  lived with her Mother "Melina" played by Rachel Weisz, Father "Alexei" played by David Harbour, and her sister "Yelena" played by Violet McGraw and Florence Pugh. They were sleeper agents.  When they were discovered they fled to Budapest and the girls became Widows.

Widows are army of girls were trained as assassins. All of the assassins worked for "Dreykov" played by Ray Winstone.  When the family returns to Budapest both "Natasha" and "Yelena" were made Widows.

The movie then jumps to the present follows "Natasha"after "Captain America-  Civil War".  It's a good idea to watch that one first. The movie shows how Natasha reunites with their family with a common goal.   T

The movie is one of the best movies that has come out this year though it was finished and schedule to be released this year.  It also said because is the last movie that will feature 'Natasha Romonoff" because her life ended in "Avengers End Game".

But it is wonderful additional to the Marvel Universe. 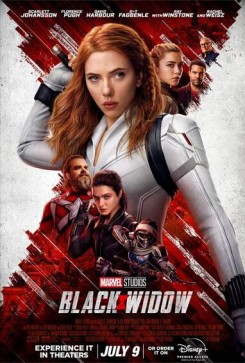