It's been a while since Hugh Jackman appeared in a movie worth seeing.  His last memorable role was playing  "P.T. Barnum" in the "Greatest Showman" in 2017.  I also starred as "Logan/X-24" in the acclaimed "Logan" in 2017.  The roles after that were mediocre, not up to his usual standards.

Let's not mention "Missing Link" or "The Front Runner".  Too late. LOL. " Reminiscence" is a different film.

"The movie take us to the near future, climate change has caused the seas to rise and flood Miami. Extreme daytime temperatures have forced most people to live at night." Hugh Jackman plays "Nick Banister".

Nick is a private investigator who uses technology to play the memories of his targets to pull out the truth.  When a new client "Mae" ,played by Rebecca Ferguson,  comes into his life requesting help everything changes.

Aiding him in this business is "Emily 'Watts' Sanders" played by Thandiwe Newton who is his assistant.

When "Mae"disappeared Nick's life started unravel.  As he unearth's the reasons for Mae's disappearence everything was falling apart.

The movie shows how far a person can fall .  It is an entertaining but sad movie. The public has not warmed up to it.  The film made 5 Million dollars so far.   We shall see where the film ends up. 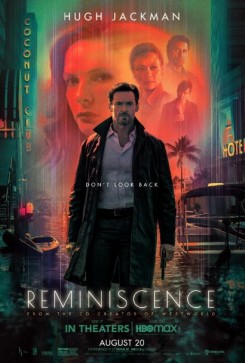