"Respect" is one of the first musically oriented movies to come out this year.  The movie is the story of the legendary "Aretha Franklin".

The movie starts with "Aretha" as a child growing up the her Father's house "The Reverend C.L. Franklin"  played by Forrest Whitaker.  From her early beginnings her love of singing took her life over.

Jennifer Hudson does a nice job playing "Aretha".  I thought she did a great job playing the singer.  Mom thought she was too pretty and didn't physically resemble Ms. Franklin at all.  When Jennifer Lopez played "Selena" they looked similar.  The lack of resemblance. of Ms. Hudson to Aretha Franklin bothered Mom.

The film shows her how important her relationship was with her Mother "Barbara" played by Audra McDonald.  And with her Sisters  "Erma"played by Saycon Sengbloh and "Carolyn" played by Hailey Kilgore.

The film shows how "Aretha" rose through personal hardships to become the "Queen of Soul".  The music was great and Jennifer Hudson's lends her beautiful voice to the role.

"Respect" is a movie worth watching.  The movie is rated PG 13. 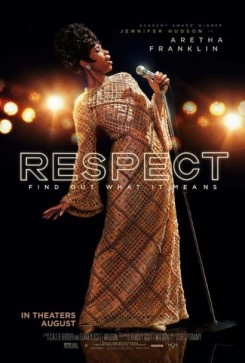