Kenneth Branaugh is a very talented actor and director. He was born in Belfast, Ireland.  When he was young his family moved to England.    The movie Belfast takes him back to his roots and is partially based on his own experiences.

It is the story of "Buddy" played by Jude Hill who is a carefree young boy who lives in Belfast with his mother "Ma" played by Caitriona Balfe and "Pa" played by Jamie Dornan. "Pa' worked in England to support his family.
Belfast was plagued with violence centering on Catholic worshippers who lived in Belfast.  The movie shows how the family coped with the violence and how everything affected "Buddy", who actually had a Catholic playmate.
The film takes place in 1969 and everything takes on the feel of the 1960's.  The soundtrack by Van Morrison is wonderful.  He also was born in Belfast, Ireland
The cast in wonderful, Mom thinks Caitriona Balfe is wonderful and did a great job playing "Mollie Miles" opposite Christian Bale in the film "Ford vs Ferrari." Jamie Dornan was known for playing "Christian Grey" in "Fifty Shades of Grey". Rounding out the cast is Academy Award winning actress Judi Dench plays "Granny" and Ciarán Hinds plays "Pops".
What is great about the cast is that Ciarán Hinds and Jamie Dornan were both born in Belfast, Ireland. Caitriona Balfe was born in Dublin, Ireland.
The story focuses in on "Buddy" and his relationships with his family and friends.  You really get an idea of what his life was like with his relationships with his schoolmates, family, and the town. It really gave a glimpse of what life was like in Belfast in the 60's.
If you want to see a movie with a big heart take a look at "Belfast:"
0.0/5 rating (0 votes) 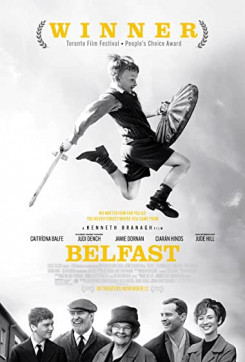