When it comes to the movies, sequels are always make me work harder because you have to watch the orginal one.   The original Maze Runner was okay but I thought it was  strange all of those kids living in an arena fighting strange monsters.   But the best part was when they escaped the Maze and ended up heading off to a new adventure.

The next installment took us to a holding facility where the kids were treated well with food and shelter but then strange things started happening and the kids new they couldn't stay there very long.

Dylan O'Brien returns as 'Thomas ".  All of the other original cast members of "The Maze Runner" returned. as when we left them.   This time they were joined by some new members as they continue to fight "WCKD" ,

This movie moved a lot faster than "The Maze Runner" as  the boys had to deal with the earth falling apart,  really strange zombie like creatures called "Cranks".  There was even a crank rat in the movie that was unusual  By the way I can speak for myself that I would never eat a rat or a mouse, they are gross.  I don't even like to go near them though many cats do.  The one in this movie was strange.

The cast had some new characters including  "Aris", played by Jacob Lofland.  I really liked Giancarlo Esposito as "Jorge".  They both gave great performances..  I thought original cast did a great job too and the story was much better this time because it moved.   I am not sure of they will make the third installment, "The Death Cure." but I enjoyed  "The Scorch Trials" much better than the first one. 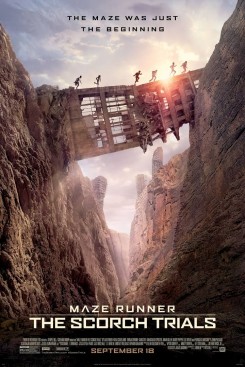