Sometimes a movie takes you by surprise.  "Gifted" did.  It's the story of "Frank Adler", played by Chris Evans, who is a single parent, taking care of his niece, "Mary" played by McKenna Grace.  She lives in a cozy community in Florida by the sea.  Her neighbor, "Roberta" is a maternal infleunce.  She even has a one eyed cat named "Fred", who I thought was cute.

Mary goes to school and it becomes apparent that she is very smart.   Eventually Frank's Mother comes into the picture and starts going after "Mary" in a custody battle.

The story shows how strong the bond between Frank and Mary is.  The ending was a total surprize and everyone did a great job.  There were points where you could cry and other parts that made you cheer.

If you like a movie that makes you cheer at the end, "Gifted" is worth seeing. 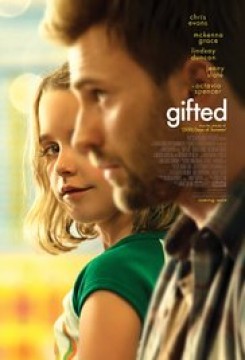