Christian Bale stars as "Captain Joseph J. Blocker". He was a veteran soldier who killed many Indians through his career. When "Colonel Abraham Briggs" played by Stephen Lang ordered him to escort "Chief Yellow Hawk" played by Wes Studi it became an assignment that changed him.

"Chief Yellow Hawk" had been imprisoned for seven years. Colonel Briggs and The US Government decided to release him because he was diagnosed with cancer and decided to let him go home.

On his journey to Montana Joseph meets "Rosalie Quaid" played by Rosamund Pike who survived an Indian attack. She joins the group.

The story develops with many ups and downs. The cast is amazing. Rory Cochrane plays "Master Sgt. Thomas Metz" who is Joseph's right hand. Ben Foster plays "Sgt.Charles Willis" who was charged for killing Indians and was being transported by Joseph. Timothee Chalamont, who has been nominated for Best Actor for "Call Me By Your Name" plays a french soldier in Joseph's squad.

"Hostiles" was not an easy watch and time but it was a good movie. Scott Cooper did a great job directing the movie. Even his daughters had parts in the movie. He is also really nice according to Mom. Mom met him when he was in Pittsburgh promoting a movie called "Out of The Furnace" which also starred Christian Bale. It was filmed here.

The movie is Rated R for strong violence, and language.   I wouldn't bring the kids but I would definitely check it out. 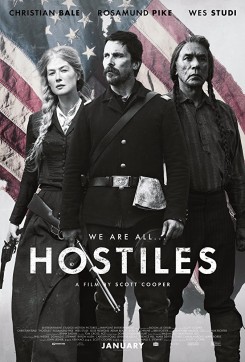