Mom says when people win Academy Awards in the Best Actor or Actress categories they can make some bad future choices on roles.   Natalie Portman won the Best Actress oscar for "The Black Swan" in 2010.  She has  also done some great work in movies like "Jackie"  which won her another Best Actress nomination.   What made her choose the role of "Lena" in this movie beyond me.

The movie "Annihilation" was a very strange movie with hard to follow plot.  Now I am a cat so maybe I do not have the brains of a human but I really couldnt figure out what was going on in the movie.

The movie stars Natalie Portman as Lena who is a scientist whose husband "Kane" played by Oscar Isaac goes missing in an area that aliens have taken over in the United States.   She goes into this area to find him and nothing made sense.

The movie takes us into a world where animals devour humans and retain their persanalities. The enviroment looks strange with exotic creatures and then humans get taken away.   I found it very hard to watch especially when humans get killed and when the creatures were destroyed.

The movie really was pointless .  The director even said in an interview how the movie was hard to adapt and he was even amazed that the studios gave him money.  Mom and I agree.

The ending was predictable and stupid.  If I were you I would avoid this movie like the plague.  It's a pity the cast the movie have done great work on other projects.  But I guess that's the thing about "Annihilation" that bothered us.  Nobody seemed to care.

The movie was really a disappointment.  Save your money and go see "The Black Panther" or "Game Night". 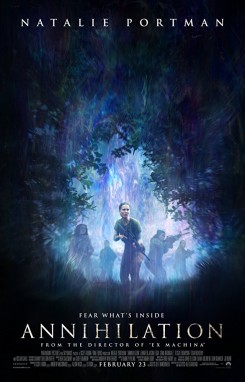