”Skyscraper” is a movie that could be compared to the classic movie “Diehard”.  In “Diehard” Bruce Willis took on a terrorist played by the late Alan Rickman.

”Skyscraper” is the story of “Will Sawyer” played by Dwayne Johnson who is a former Cop turned security analyst.  His job was to analyze “The Pearl”,a state of the art buildng created at “Xha Long Ji” who is a tech billionaire played by Chin Han.   Will's friend, "Ben" played by Pablo Schreiber brought him into the deal.   Neve Campbell played Will's wife "Sarah" joined him as did his son and daughter.

Some of Xha Long Ji's dealings brought on a criminal element who wanted to destroy him and if needed the building for a special file he posessed.

The movie had some amazing special effects as "Will" did every type of stunt possible to save his family.  It made a the movie very exciting.

Unfortunately it's reviews haven't been good and the box office weak here but since many top actors in it were of oriental descent, it has been kicking butt in China.

The movie which was predicted as one of the biggest bombs of the year actually surpassed it's production budget so it's on it's way to doing well.

Glad to hear it. 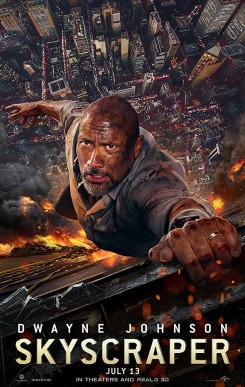