This is a time of year when there aren't many new movies opening so we look at.  When we were looking at movies in theaters on ISTV  "The Guernsey Literary and Potato Peel Pie Society" popped up and what a delight it was.

The movie was directed by Mike Newell, who has directed such classics as "Four Weddings and A Funeral" and "Harry Potter and The Goblet of Fire".

The movie took place during World War 2.   The Nazi's had invaded the small island of "Guernsey" which is located  in England.   The people of the island created the The Guernsey Literary and Potato Peel Pie Society when approached by Nazi soldiers.

From this beginning these islanders bonded together to keep their lives in order as everything important to them was taken away from Nazi Germany.

Michiel Huisman plays "Dawsey Adams" one of the leaders of the group.  He reached out to author, "Juliet Ashton" played by Lily James for a book he was looking for because the Nazi's also destroyed their local book shop and library.   At this point the Nazis had left Guernsey and the islanders where trying to put back their lives.

Juliet was intrigued by the society and ventured to Guernsey to meet the club.  Upon coming to the island there were some members of the Society, "Eben Ramsey" played by Tom Courtney and "Isola Priby" played by Katherine Parkinson who welcomed Juliet but others "Amelia Maugrey" played by Penelope Wilton were less than hospital.

As Juliet stayed on the island and discovered the true story of the society many interesting facts were revealed.

The overall message of the movie is that love can conquer differences in backgrounds and nationalties.

The ending was surprising.   The movie is available on Netflix and being released in theatres in different parts of the world.    It's definitely worth looking at. 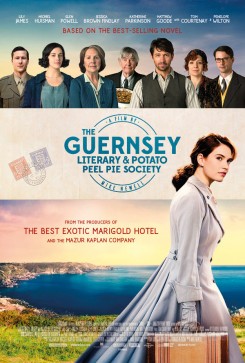