Mom and I weren't thrilled to see "Bumblebee" initially.  "The Transformers" series is not one of her favorites.  I mean lets face it, "Optimus Prime" is not exactly a warm and fuzzy creature.    But "Bumblebee" is a totally different creature.

The movie shows how things on "Cybertron" home of the autobots was not the funnest place to live. When the resistance was under attack "Bumblebee" was sent to work to save the planet.

His journey eventually landed him in a marina junkyard where a young girl named "Charlie" played by Hailee Steinfeld decides to take it home.  In the process "Bumblebee" reveals himself to her.

The story deals with Charlie's loss of her father and how she was not ready to move on.  Bumblebee's fight for freedom.  Charlie was a bit of outsider.  The only friend she had was her neighbor, "Memo" played by Jorge Lendeborg Jr.  She worked at a amusement park and was different than everyone else.

What Mom liked was that it took place in 1987 and the music of the era was featured in the movie. The movie had so many ups and downs but the relationship between "Bee" and "Charlie" was deep.

I liked out actor "Dylan O Brien" voiced "Bumblebee".  He was such a tough guy.  Together with "Charlie" they were a great team.

The ending was cool too.  Not your typical "Transformers" production number.  I think it helped that "Michael Bay" didn't direct it.  If you ever looked at him it looks like has had too much botox, which to me how his movies seem.  Too much botox.

Travis Knight, "Bumblebee's director did a great job personalising a relationship between a autobot and a teenager!!

Even if you do not like Transformers movies you need to check out "Bumblebee." 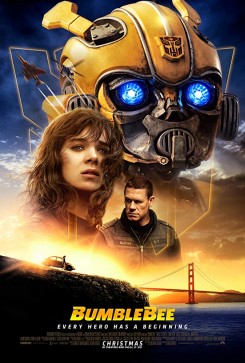