"Vice" is a movie that showed how businessman "Dick Cheney" infiltrated the Presidential Administration of "George W. Bush".

The movie was directed by Adam McKay who directed "The Big Short" which was kind of boring too.   Christian Bale did an extradionary job as normal playing "Dick Cheney".  Amy McAdams was great as "Lynne Cheney". I liked Sam Rockwell as "George W. Bush".  Steve Carell played "Donald Rumsfeld".

The story showed how Dick Cheney orchestrated taking over the George W. Bush adminstration.   It was pretty seedy and quite frankly really boring.  There was a part of the movie it rolled to credits and then backed up.  I was ready to go then.

Mom says the story was accurate but sometimes that can be boring.  I am not the only who has noticed this because the movie has barely made  33 Million.  With is All Star cast which also includesTyler Perry and Alison Pill not to mention the folks I mentioned above this is sad.

I think one of the reasons the movie failed it that is Donald Trump.  I mean the movie is about George W. Bush's adminstration and I think people are tired of politics.  Internationally I think the last thing movie audiences want to do is to see a movie about an American President.

"Vice" is long and boring.  Even though it has a great cast, as Mom says seeing this movie is like "rearranging the deck chairs on the Titanic" .   These actors can't save the ship. 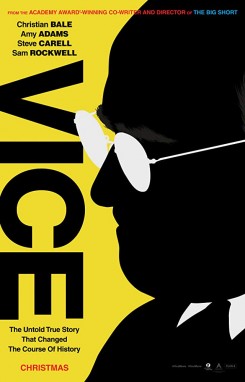