"Serenity" was a movie that Mom and I thought would be good.  It stars Anne Hathaway who usually picks good projects and Matthew McConaughey who doesn't always have the best sense.

The movie is centered around Plymouth Island  A small beach community where "Baker Dill" played by Matthew McConaughey runs a boat charter business who also fishes for Swordfish and an elusive hugh tuna.  Djimon Hounsou plays his crew "Duke".  His boat is called "Serenity".

Baker Dill lives in a container and takes his showers naked in the ocean which could be for some women the price of admission.  When approached by "Karen Zariakas" played by "Anne Hathaway" to kill her husband "Frank Zariakas" played by Jason Clarke he feels the pressure to help.  Mostly because Karen and Baker have a son, "Patrick" who is a bit of an introvert.

It was strange to see Anne Hathway with blonde hair playing such a shallow part. Jason Clarke didn't have much screen time.   The movie had a slow script with some strange characters like "Reid Miller" played by Jeremy Strong who kept chasing Baker all around the island to give him a fish locator.

The ending was not what I expected but honestly this movie was not worth the time to get there. 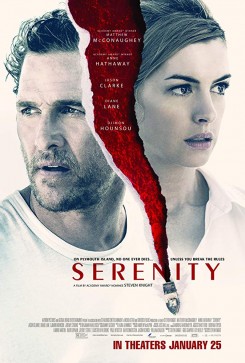