"Greta" is a crazy movie about a strange lady who left a purse on the NYC subway.  A young woman "Frances" picks up the bag and returns it to "Greta" when the subway lost and found office was closed.    "Greta" played by veteran french actress, Isabelle Huppert was creepy older woman who welcomed "Frances" to her house.

"Frances" at first befriended "Greta" even though her best friend "Erica" played by Maika Monroe and her father "Chris" played by Colm Feore thought their relationship was odd.  From a friendly relationship Frances cut herself off when she found evidence that "Greta" had done this before.  Greta's interest in Frances became obsessive as she stalked her and left a countless number of texts, emails, you name it.

The movie had some crazy ups and downs but the ending was pretty cool but very creepy.  If you have horror movies with an interesting twist check out "Greta".  The movie is directed by Neil Jordan who has directed some crazy movies like "The Crying Game" "Interview with A Vampire" and "Michael Collins".  "Greta" is the first movie that he has directed since 2012.

It was nice to see him back in the directors chair. 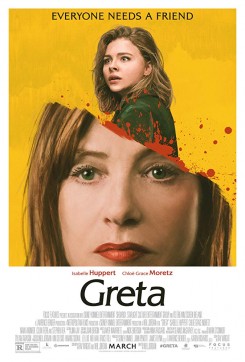