"Captain Marvel" is the latest movie to hit  The Marvel Universe.   This is the first single movie where the main character is a female.   A movie about 'The Black Widow" is in the works but this has been the case for along time.

"Captain Marvel" features Brie Larson in the lead role.  It's confusing because she also was known as "Vers" and "Carol Danvers".  We first saw her living on the planet "Kree" where she was part of their defense force who primarily defended the planet against the shape shifter force called the  "Skrulls".

The movie also brought us to earth of the past too as Carol discovers her past.   The story has features a great cast including Jude Law as "Yon-Rogg" , the head of her team.   Annette Beining makes her marvel debut as "Mur-vel, Dr.Wendy Lawson and The Supreme Intelligence".  The cast also includes Ben Mendelsohn as "Talos/Keller".   One of the best performances we have seen of him to date.  From "Guardians of The Galaxy"  Lee Pace appeared as "Ronan The Accuser".   Lashana Lynch did a great job playing Carol Danver's best friend "Maria Rambeau".

The best part of the movie was "Goose".  Carol Danver's cat who had supernatural powers.  He provided comic relief to the movie.  There were some very funny parts when some of the Aliens were terrified of "Goose".   Of the cat named Reggie who played "Goose" didn't get a movie credit.  No surprise there.  I thought he was really cute .  Mom said he reminded her of her of one of her cats "Max" who was part of my cat family prior to me.

The movie also some creatures like "Ronan" from "The Guardians of The Galaxy" and "Talos" from "Black Panther".  That was cool.    Also the fact that "Captain Marvel" will be in "Avengers-End Game" is cool too.

Make sure you stay for the extra scenes. I could personally relate to the last one. "Captain Marvel" is a wonderful addition to the "Marvel" universe.

The other thing was the tribute to Stan Lee in the beginning credits.  He will be missed. 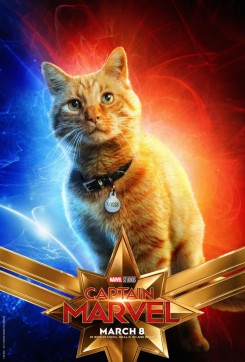