"Wonder Park" is a sweet animated movie that a young girl named "June" voiced by Sofia Malia and Briana Denski  who has a big imagination.  She and her Mother, voiced by Jennifer Garner came up with "Wonder Park".

When June's Mom left the idea of "Wonder Park" died.  Even though her "Aunt Albertine" voiced d by Kate McGregor Stewart and "Uncle Tony" played by Kevin Chamberlin.

When June went on a field trip with her class she stumbled through the woods and discovered "Wonder Park" with all of the characters she and her Mom created come to life.  "Greta" voiced by Mina Kunis was a boar/pig I couldn't tell was the leader.   All of the other characters that came to life included "Steve" a porcupine voiced by John Oliver, "Steve" played by Norbet Leo Butz was a chimpanzee who had the key to restarting "Wonder Park".    All of the characters came to life.

The movie was really cute and had some great ups and downs.   If you are looking for a nice movie for the whole family, "Wonder Park" is your best bet. 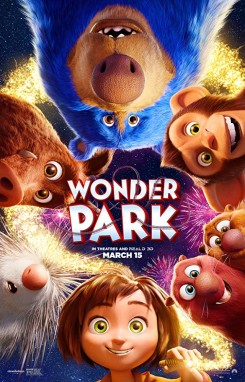