The movie features a normal family that goes to their beach house on vacation where  "Adelaide" played by Lupita Nyong'o is traumatized as a kid when she goes into a house of mirrors and meets her double.

Many years later she and her family including husband "Gabe" played by Winston Duke plus her kids "Zora" played by Shahadi Wright Joseph and "Jason" played by "Evan Alex"  return to her family's beach house and the problems started again only this time they escalated.

The movie is creepy especially when their neighbors "Kitty and Josh Tyler" played by Elizabeth Moss and Tim Heidecker joined the fun.   I was happy to see there were no pets in their homes because who wants to see a cloned dog or cat.

The movie was strange and bloody.  Much more than "Get Out".  I really thought it was freaky.    If you like horror movies, you will like "Us".  We didn't. 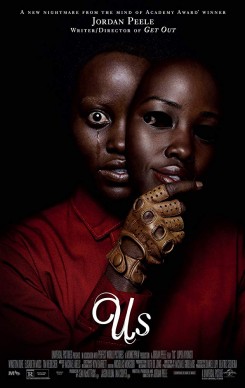