The past two individual DC Comic movies have been good.  Gia Gadot was wonderful as "Wonder Woman".  And  Jason Momoa takes super heroes to a whole new level with "Aquaman".

Some of the DC Comic movies of the past really didn't sit well with me.  I thought Henry Cavill did a good job playing "Superman".   I thought his teeth were clenched too much of the time.  As for Ben Affleck playing "Batman".  Personally I thought his hair piece was going to fall off alot of the time.   We thought "Shazam" was OK.

The character which is part of the DC comic Universe didn't have the feel of a DC Comic movie.   The story centers around an "Billy Batson" played by Asher Angel who becomes an orphan and ends up inheriting super powers from "The Wizard Shazam" played by Djimon Honsou.

When Billy becomes "Shazam" is  also transforms from a fourteen year boy into a full grown played by Zachary Levi. He is big and semi muscular and actually funny at times.

The one thing "Shazam" doesn't is confidence and he acts like a kid.  He also has an arch nemesis, Dr. Thaddeus Sivana who is kind of scary.  Mostly because he  is played by Mark Strong, who is great actor.

"Shazam" in the past was a TV series.  I think that it should stay one.  Its not a bad movie but it's not on the level of "Aquaman" or even "Deadpool" from the Marvel Comics Universe.  He is not one of my favorites. 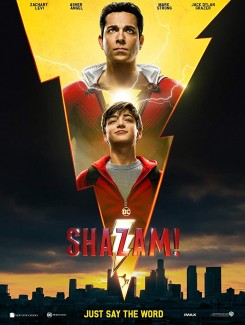