"Hellboy" is a remake of a movie that Director Guillermo del Toro who won the Best Director Oscar in 2018.  He made "Hellboy" in 2004.  This "Hellboy"followed the comic book story and was different.

Sasha Lane plays  "Alice Monaghan" and "Major Ben Daimio" played by Daniel Dae Kim who turns into a cat creature.   They both aided "Hellboy" in fighting "The Blood Queen".

The movie incorporates the legend of "King Arthur", "Merlin" and  "Excalibur".  It features alot of action as Hellboy fights his foes.

The movie had alot of action but I sort of liked Ron Pearlman better as "Hellboy" compared to "David Harbour".  There was not much of representation of Nazi's in this one compared to "Hellboy 2019". 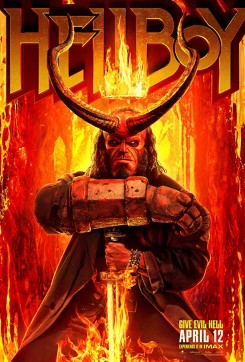