"Tolkien" is a movie that is based on author "J.R.R. Tolkien" beginnings.   Tolkien went on the write the classics "The Hobbit" and "Lord of The Rings".    Both of the movie series combined have grossed over 6 Billion Dollars.  Whats also amazing these movies hit the screen starting in 2001 and ending in 2012.   The price of a movie tickets were much lower back then so this is really cool.

It was cool to see in "Tolkien" how "J.R.R. Tolkien" evolved.  Nicholas Hoult did a great job playing "J.R.R. Tolkien".  It showed is early years growing with his brother "Hilary" played by Guillermo Bedward and Mother in the country.   When is Mother died he ended up in a boarding house/orphanage where he met  "Edith Bratt" played by Lily Collins.  At boarding school he met three friends  "Robert Gilson" played by Patrick Gibson, "Geoffrey Smith" played by Anthony Boyle and "Christopher Wiseman" played by Tom Glynn-Carney.

The ending was cool too so if you want a good drama, check out "Tolkein" 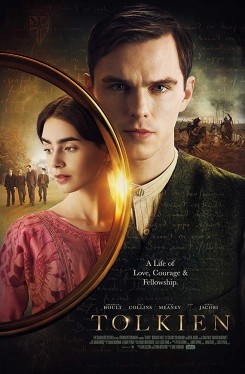