I’m One of the formulas that Disney has been using has to take their animated classics into regular feature films. “Beauty and The Beast” was a big hit.

This year a full cast version of  “The Lion King” will be released. But until that opening date we have “Aladdin”.

I never saw the animated version of “Aladdin” in its entirety but Robin Williams was great as the genie.  Will Smith did a great job playing The Genie.  Naomi Scott was great job playing “Jasmine” Mena Massoud was great as “Aladdin”.  The cast also included Marwan Kenzari playing the evil "Jafar".  Much of the rest of the cast was unknown, which is good.

The movie had many songs and a good story similar than the animated version of the movie.   It was a very good story and cast.

If you want a good story for the entire family check out "Aladdin". 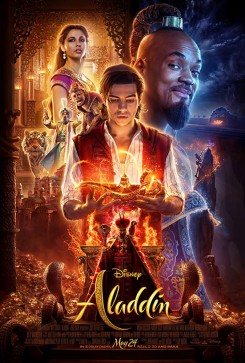