When Mom and I went to see "Rocketman" we were not expecting it to be as wonderful as it was.  The movie is about the life of legendary showman, "Elton John".   Unlike "Bohemian Rhapsody"  "Rocketman" is more of a musical with cast members singing the songs of "Elton John".

The movie shows how Elton John started as a child prodigy learning at the Royal Academy of Music.  From there he discovered his voice.  When he approached a record company they threw some lyrics at him that needed music.   From here we meet the man who created those lyrics, "Bernie Taupin" played by Jamie Bell.   Their partnership has lasted over fifty years.

Taron Egerton did a great job playing "Elton John".  Unlike "Bohemian Rhapsody" Taron Egerton did all of the singing.  In fact we read that Elton John insisted that he sing the songs the way he wanted to sing them, not the way they were recorded.   The result was a movie that was a celebration of a brilliant mans life.

The movie showed the genius of a man but also his flaws.  It showed his many addictions to alcohol, drugs and more.  But it also showed his brilliance.

The music of the movie was wonderful as were the performances.  The movie takes you by surprize.    If you want to see a great movie, check out "Rocketman". 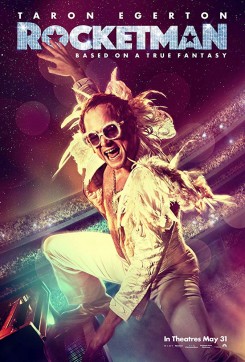