Godzilla- King Of The Monsters

In the world of Marvel "Spiderman" is the one character that has alot of movies out there.  I mean first Toby Maguire played "Spiderman".  Then Andrew Garfield and finally his fellow Englishman , Tom Holland.

In the world of DC Comics "Godzilla" is one of the biggest creatures with over nine movies.  "Godzilla- King Of The Monsters" again tries to reinvent the monster.   He became the friend of scientist team,  "Mark Russell" played by Kyle Chandler and his ex-wife "Dr.Emma Russell" played by Vera Farmiga.

Emma and her daughter, Madison, played by Millie Bobbie Brown,  were captured by "Jonah Alan" played by Charles Dance and they continued to work  with "Godzilla".  Meanwhile the area where they lived was quarantined and her husband Mark was thought to be a madman.

He battled Rodan, Mothra and of course his biggest enemy the three headed King Ghidorah

The movie ended with "Godzilla" surviving the battle and we discovered there is another movie, "Godzilla vs King Kong" will be out in 2020.    If you like monsters, Godzilla is great fun. 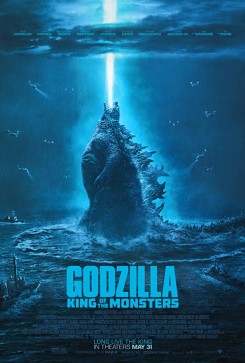