"Yesterday" is one of the most inventive movies that came out in recent history.  The movie centers around "Jack Malik" played by Himesh Patel.  He is a former teacher who has been trying to break into the music business.

After doing a disappointing concert he ends up getting hit by a bus.  The reason the bus hit him was that there was a blackout all around the world for just a few minutes.  In this time some things were forgotten.   Nobody remembered "Coca Cola", The group "Oasis" and "The Beatles".

When Jack discovered this he decided to record some of the "Beatles" songs.  He ended up on a local show where he captured  the attention of Ed Sheeran.

Through this connection "Jack Malik" became one of the hottest performers in the world.  There were some people who remembered "The Beatles" that added an interesting edge to the story.

Himesh Patel did a great job playing "Jack" and singing all of the "The Beatles" songs.   Lily James played "Ellie Appleton", Jack's grade school friend who was his first Manager.  Jack had a kooky bunch of friends including "Rocky" played by Joel Fry.  Rocky was basically looney and not all there.  All of his friends were surprisingly fun but crazy.

The movie had many ups and downs but it was really fun.   The ending was not what we expected either but it was fun.

If you want to see a quirky, off beat movie "Yesterday" truly fits the bill. 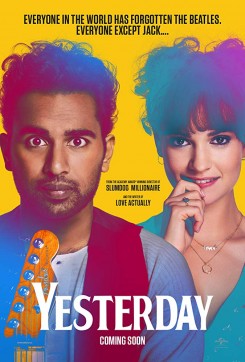