Sometimes Mom drags me to the movies when there is nothing showing.  That is the reason we saw "Crawl".   We didn't really research it prior to seeing it but the movie features a young lady, "Haley Keller" played by Kaya Scodelario who swims on a college team  mainly because her father, "Dave" played by Barry Pepper was her first coach.

When her sister,"Beth" played by Mortydd Clark asked if she heard from her father, Haley braves a category five hurricane to go to her hometown in Florida.   Haley picks up her Dad's dog at his apartment and heads over to her vacant family home.

Haley finds her Dad hurt in the basement of her house and they proceed to be attacked by super sized Alligators.   The movie had so many absurd moments that it was funny at times.

First of all in Florida, because the water tables are so high houses do not have basements and yet this house did.   Also the dog kept barking near the stairs the house filled up with water.   The fact the alligators left alone was strange.  It would have upset me if they hurt him.

There were alot of other strange facts that didn't work with the movie too.  The fact they made it to a bought and instead of running it when the levey broke and all of this water spilled in the town they let the boat drag them back into the house.

Also both Haley and Dave sustain multiple Alligator attacks.  Haley had her hand in an alligators mouth and it wasn't cut off.   Too surreal me.  Not that I wanted to see that.

The movie was so bad it was funny at times.   If you like really bad horror movies check out Crawl. 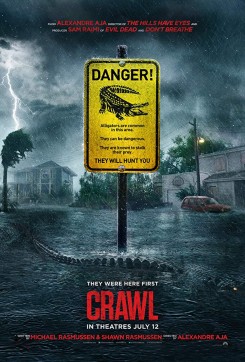