"Stuber" is yet another version of the buddy movie.  These movies have been spun out in the past like "Lethal Weapon", "Miami Vice" or "Bad Boys".  "Stuber" stars Dave Bautista, who recently was seen in "Avengers End Game" as  "Drax".  It seems like Hollywood is turning him a new version of "The Rock" aka Dwayne Johnson.

In "Stuber" Dave Bautista plays "Vic Manning".  He lost his partner, "Sara Morris" played by Karen Gillan.   When he got lasik surgery he was ordered not to drive and when he followed a leadi in Sara's murder he met "Stu" played by Kumail Nanjiani, who was better known as "Stuber".  He was his Uber driver.

Stu was obessed with "Becca" a former college friend aka girlfriend played by Betty Gilpin.  While trying to connect with him Vic lead on a wild chase that brought them a male strip club, and other insane areas.

The story had some pretty crazy ups and downs but it was in the end more of the same.  There weren't any animals in the movie.

We kept waiting for the movie to get better but it didn't.   If you like movies that predictible you will like Stuber. 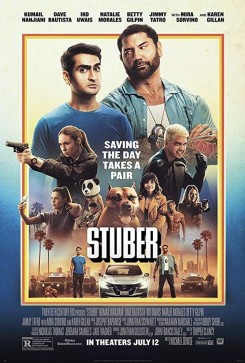