Dora and The Lost City of Gold

"Dora and The City of Lost City of Gold"is based on the popular character "Dora" who started as a character in educational TV.  There were shows that traveled featuring "Dora".  And now finally there is a movie.

"Dora and The Lost City of Gold" is a movie that is more like a fancy TV show.  The story is kind of boring.   The movie stars Isabel Moner as "Dora".   She lives in the jungle with her parents, "Elena" played by Eva Longoria and "Cole" played by Michael Pena.

"Dora" moves to the city to live with her cousin "Diego" played by Jeff Wahlberg and his family when her parents go after the city of gold.   While on a school trip "Dora" and Diego" plus their friends "Sammy" played by Madeleine Madden and "Randy" played by Nicholas Coombe where kidnapped by "Alejandro" played by Eugenio Derbez.

The kids end up in the jungle where "Dora" is forced to give the location of her parents because "Alejandro" wants to find the City of Gold too.

The movie is kind of boring at times and very predictable.  The characters are likeable but I thought the movie was boring.   "Dora" was so cheery times I wanted to wack her with one of my cat toys.

If you have little kids, "Dora" is likeable but the movie is boring. 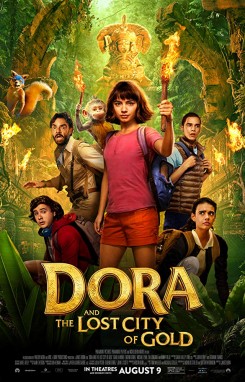