When Mom and I saw "Good Boys" was coming out Mom wanted to see it , primarily because, Jacob Tremblay, the young actor who played "Auggie Pullman" in the movie "Wonder" was starring in it.  His character was "Max".  gfThe movie also stars Keith L. Williams who plays "Lucas" and "Thor" played by Brady Noon. They described the boys as "The Beanbag Boys".

The boys were not very popular in school.  When they were invited at a party at super popular kids "Soren" played by Isaac Wang house it changed everything because the party was going to feature kissing.  "Max" was excited by this because the girl he had a crush on, "Brixlee" played by Millie Davis was also going to be there.  One cute note that I told Mom about was that actress  Millie Davis played the character "Summer" in the movie "Wonder" so this was not her first time working with Jacob Tremblay.

The movie had some crazy ups and downs.  Many of which were really stupid, including the staging of elementary school version of "Rock of Ages" which was horrible.

I thought "Good Boys" should be renamed "Bad Boys" but Will Smith and Martin Lawrence have the lock on that movie.

This movie was pretty horrible and should be avoided if you want to see a good movie. 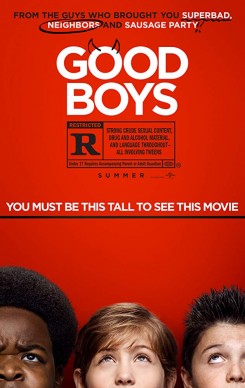