"Judy" is the story of one of the most beloved performers in think in world history, "Judy Garland,"    "Judy Garland", the former Frances Gumm, had a tragic life.

She was the product of the Hollywood studio system .  Back in the 1930's the studios owned their stars.  Young stars like "Judy Garland" were literally in service of the big studios.   The studio put them on drugs to keep the actresses thin.

Her biggest hits were "The Wizard of Oz", the 1954 version "A Star Is Born" and  "Judgement at Nuremberg".   In the later part of her career it took a downward spiral with Judy primarily working as a singer.    This is where the movie starts.

Renee Zellweger does a great job playing "Judy Garland'.  We see Judy struggling in Los Angeles.   It was suggested to her that if she headed to London, England where she will sing a number of sold out performances.

The movie shows up and down her life was .  Renee Zellweger sung all of the songs and she really did a great job.  Overall "Judy" is a good movie but it is depressing. 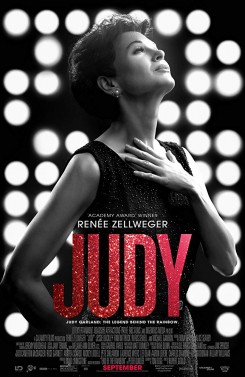