"The Joker" is a character that has been part of the DC Comics empire for a long time.  The first actor who portrayed the character was actor Cesar Romero  in the TV series of "Batman" which is also starred Adam West.

Later renditions of the character were portrayed by Jack Nicholson who played in "Batman" opposite Michael Keaton.  Then Heath Ledger took on the role of "Joker" in "The Dark Knight" opposite Christian Bale.  Mr. Ledger's performance won him the Best Supporting Actor award.  Unfortunately he died before the award ceremony took place.

"Joker" is a very dark version of the character.  The character of "Arthur Fleck/Joker" is played by Joaquin Phoenix is a bit of a loner.  It was said that to play "Arthur" he lost 52 pounds.  He really looked like he needed to eat something when I watched the movie.

"Arthur"was a total victim.  People beat up on him.   It was pretty sad and eventually he snapped.   The movie was pretty dark.  It was clear "Arthur" was delusional and had issues.  He lived in a old apartment building with elderly Mother,  "Penny" played by Francis Conroy.  Also adding life to the story his single Mom neighbor, "Sophie Dumond" played by Zazie Beetz who Arthur was sweet on.   Other characters which were part of the story were "Thomas Wayne" played by Brett Cullen , "Martha Wayne" played by Carrie Louise Putrello and of course, "Bruce Wayne" played by Dante Pereira-Olsen,   Robert DeNiro starred as talk show host , "Murray  Franklin".  He as always did a great ob.

The movie was really sad. Joaquin Phoenix gave a great performance as "Joker" but it was hard to watch.   The movie was so violent  I was very glad to see that there weren't any animals in the movie. 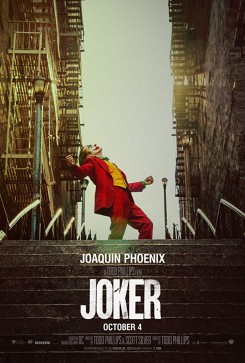