"Harriet" is a movie based on the life an amazing of "Harriet Tubman" .   The movie starts showing  Harriet's origin's from being the slave "Minty" played by Cynthia Erivo.   The movie starts with Minty's marriage to "John Tubman" played Zackary Momoh .

When asked her owner, "Edward Brodress" played by Michael Marunde, to have babies that were free his reaction was to try to sell her.  "Minty" got upset because her sisters were sold past the age where they were supposed be sold.  As a result she ran to freedom.   In addition  to Edward Brodress he had a wife named  "Eliza" played by Jennifer Nettles and a son "Gideon" played by Joe Alwyn.  "Gideon" was obessed in finding "Minty".

The movie shows are scary Harriet's journey was and how she overcame obstacles.  Once she arrived in Philadelphia to freedom she met publisher "William Still" played by Leslie Odom Jr. He was the one who guided her to renaming herself "Harriet Tubman".

From there she was guided by "Marie Buchanan" played by Janelle Monae who was born as a free woman and owned a boarding house.  Harriet missed John and her family she went back.  She guided her entire family to freedom.

Through out the movie Harriet encounted so many struggles but she valiantly made it through them all. She brought her entire famlly freedom including her parents.

The story had many ups and downs but Harriet made it in the end.  She did things that other people could not do and did not let anything stop her in her quest to help her people to freedom.

Harriet is a movie worth watching.  Hopefully it will be remembered at Oscar time.. 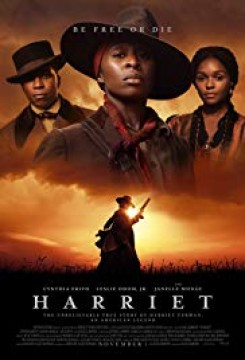