Jumanji The Next Level

"Jumanji- The Next Level"  is the sequel to 2017 "Jumanji" starring Dwayne Johnson, Jack Black, Kevin Hart, and Karen Gillan.  The first one did close to one billion dollars at the box office.  The second one features the original fearless foursome in a new circumstance.

in "Jumanji-The Next Level" Alex goes back early into the game .  When the others came back into the game identities  changed.  "Grandpa Eddie " played by Danny Devito assumes the persona of "Dr. Smolder Bravestone". Veteran actor Danny Glover plays Eddie's friend "Milo"takes over "Mouse Finbar".

It was funny to see the characters switched around.  The story was pretty fun too.  The end result had many ups and downs but it was a good story.

If you want to see a funny movie check this one out. 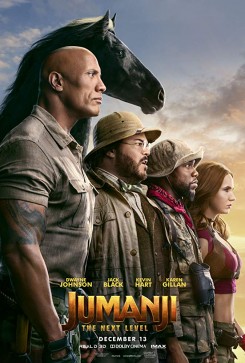