"Bombshell" is the story of a true story that happened at Fox News.  The movie stars Nicole Kidman as "Gretchen Carlson" former host of Fox and Friends and her own show.  The resigned by "Fox News" in September , 2014.   She then launched a law suit against the head of Fox News, "Roger Alies" played by John Lithgow.

At the time we watched Gretchen Carlson's demise , "Megyn Kelly" played by Charlize Theron was a prime time star of the network.  When Megyn took on "Donald Trump" it caused her alot of problems.

The other female featured as a fictional character named  "Kayla Pospisil" played by Margot Robbie.  "Kayla" was a producer who worked with "Gretchen Carlson" who had aspirations to be an anchor on screen.  For this she approached "Roger Ailes" and he took of advantage of her.

It was amazing how even later in his career a pig was still a pig.   The movie really showed how nasty men in power can be.

The heroes of the movie in the Fox organization were Rupert Murdoch's sons, "Lachlan" played by Ben Lawson and "James Murdoch" played by Josh Lawson.   They insisted on "Roger Ailes" be fired.

"Bombshell" really shows how bad management can be.  You would never find cats handle their relationships that way!!! 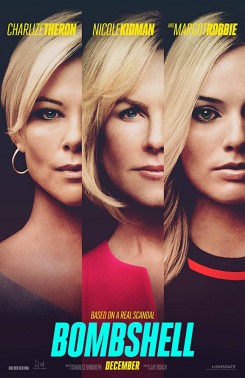