"Underwater" is a movie that cost $80 Million dollars to make.  Personally 20th Century Fox should have saved their money.   It is the story of a group of researchers who work in an underground facility underneath the sea.

The movie stars Kristin Stewart as "Norah".  She works in an underground facility with
"Captain" played by Vincent Cassell, "Paul" played by TJ Miller and "Emily" played by Jessica Henwick.  While working they encounter a monster underneath the sea.

This is a story that has been done before in movies like "The Abyss", "Leviathan", and others.   "The Meg" was came out a year ago is a much better movie. This one should never would have been made.

The movie is OK but nothing exciting.   Personally the movies I mentioned above are better.  This one is more of the same.  It was very predictible and boring.   Thank goodness no pets in this movie either.

If you want to see "Underwater".  I would suggest waiting for until you can see it at home. 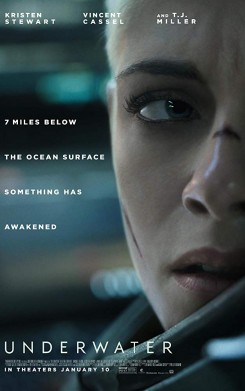