"General Erinmore" played by Colin Firth ordered the soldiers on a mission to reach another regiment to stop a massive attack on the enemy.  Because it took place in 1917 the only way to reach the other company was to send the men on foot.

The story showed the men encountering alot of obstacles on their way to fulfill their mission.

I must comment that I liked how war was fought in 1917.  It was elegant how the soldiers dressed.  During WW1 animals were used as mascots,etc.

Dean Charles-Blake and George Mackay did a great job being on camera all most the time of the movie.  Other strong performances were given by Benedict Cumberbatch, Colin Firth, and  Richard Madden .

The Academy of Motion Pictures Arts and Sciences really messed up with ignoring the great performances in this movie.    1917 is definitely a movie you should see. 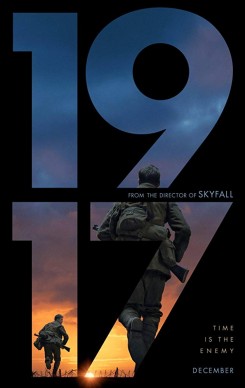