The Call Of The wild

"Call of The Wild" is a movie based on the book by Jack London.   Mom said he was a famous author from the past.  The star of the movie is "Buck".   A dog who started his life in the lap of luxury. He was the dog of "Judge Miller" played by Bradley Whitford who lived in a small town.      But "Buck" was kidnapped and thrown into the world of the Alaskan Gold Rush.

Along the way "Buck" befriended "Perrault" played by Omar Sy and "Francoise" played by Cara Gee.   Eventually "Buck" ended up in the company of "John Thorton" played by Harrison Ford.

The story is a classic tale but one thing that wasn't is that "Buck" was created via the computer.  There was a no real dog. used and it did not look real.  But still "Call of The Wild" is a great movie.

The movie had a very passionate story and featured some good performances.  Dan Stevens, who usually plays dashing heroes played the villian  "Hal".   Harrison Ford also gave a great performance as he usually does.

If you want to see a good family movie.  "The Call of The Wild" is a good choice. 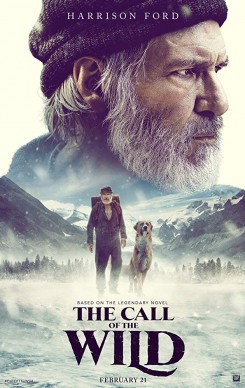