Elizabeth Moss stars as "Cecelia Cass" , a battered wife married to a psychotic, very wealthy genius "Adrian" played by "Oliver Jackson-Cohen". "Cecelia" left him and then "Adrian" was found dead.

"Cecelia" moved into her friends home, "James Lanier" played by Aldis Hodge" and his daughter "Sydney" played by Storm Reid.   When "Cecelia" finds out "Adrian" included her in her will with two stipulations then all of the crazy stuff started happening.

Elizabeth Moss did a great job playing "Cecelia" who believed "Adrian" was alive when everyone around her were convinced she was crazy.   The movie had many twists and turns but the ending was cool.

If you want to a movie with some cool surprises check out "The Invisible Man". 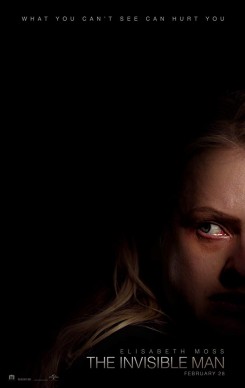