The brothers lost their Dad  "Wilden Lightfoot" voiced by Kyle Bornheimer.   When Ian had turned 16 a special quest presented itself as plan was hatched for their Dad to come to life for one day.

The process of putting the plan in place backfired so the brothers had to reach beyond their comfort zone to put their Dad back together.   Julia Louis Dreyfuss  voiced "Laurel Lightfoot'.  I didn't think her voice didn't work.                     Octavia Spencer  added a nice element of humor voicing "The Manticore."

The movie was cute but it was not on the level of other "Pixar" classics such as "WALL-E",  "Ratatouille" and "Toy Story" .  It was just a nice animated movie.

If you want to see a nice animated movie this one "Onward" is s good choice.  But if you were looking something better you will be disappointed. 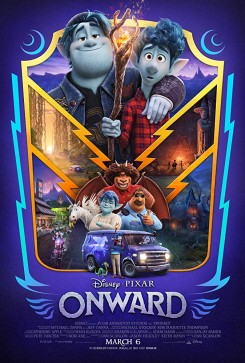