There are certain actors that Mom and I like who do a great job with action movies.  Dwayne Johnson and Vin Diesel are two actors never disappoint.   We also love Jason Momoa in action movies but we think he's got more potential than being just an action actor.

Vin Diesel , best known for the "Fast and The Furious" series plus voicing the fun character "Groot" in the "Guardians of the Galaxy" /"Avengers" plays "Ray Garrison/Bloodshot".                 When Roy and his wife are captured by lunatic "Martin Axe" played by Toby Kebbel they are he is killed.  A private agency recovers Roy and brings him back to life.

The head of the firm is  "Dr. Emil Hartung" played by Guy Pearce.   Also on Hartung's team is  "Katie/KT" played by Eiza Gonzales, and  "Jimmy Dalton" played by Sam Heughan.

Playing "Bloodshot" Vin Diesel is a killing machine.   When he regains his memory he goes after the villian who ended his life.

The movie has many twists and turns but it the ending is pretty cool.  The special effect are good too.   If you want to see a good action movie, "Bloodshot" is very entertaining.

Just don't expect to find the meaning of life from it. 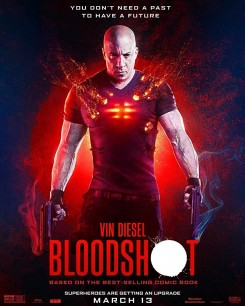