Usually movies like "Resistance" come out in the fall or early winter for Oscar consideration.  "Resistance" was released at the end of March and is truly a powerful movie.

The movie is story of French Boy Scouts who were responsible for rescuing hundreds of orphan Jewish children who left behind when their parents were slaughtered by Adolph Hitler.   "Resistance" is their story.

Jesse Eisenberg stars as "Marcel Marceau", the wayward brother of "Alain" by Felix Maoti who was involved with the French Boyscouts.  Marcel works his Father's butchershop  and performed on stage at night.

When a group of rescued orphans arrived in their town in France everything changed.  The movie focused on how the group brought these children to freedom through France and then Switzerland. What they endured was amazing.

There were a couple of scenes that were really hard to watch.  Mom and I are not into torture. The story was powerful.

Another interesting fact that "Marcel Marceau" went on to become the most famous mime of all time after World War II.

The movies cast also includes Clememce Poesy, who will be seen in "Tenet" this summer plus Ed Harris but most of the cast are unknowns which is good.

"Resistance" is a hard movie to watch but is a great story.  It was directed by Jonathan Jakubowicz who directed "Hands of Stone" which based on the life of boxer Roberto Duran. Mom and I hope that when the Oscar nominations for 2021 come out that Jesse Eisenberg's performance will be remembered. 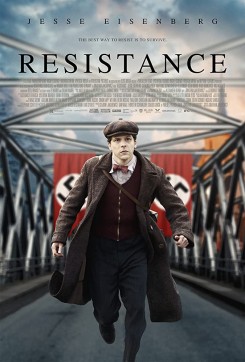