"Irresistible" is a political comedy that is available on demand this week.  Since most movie theaters are not opening until mid to end of July you better catch it online.  The movie is the story of "Gary Zimmer' played by Steve Carrell, a Democratic political strategist looking for his next candidate.

This person Gary puts his sights on is "Colonel Jack Hastings".  A retired Military Colonel who spoke up at a town meeting. The clip went viral and overnight Gary makes him a candidate to take on "Mayor Braun" played by Brent Sexton.

The movie starts from being long shot attempt to take on the establishment to all out war as Gary's chief rival, Republican political analyst, "Faith Brewster" played by Rose Byrne.

The thing that is amazing is that all this activity centers around a small Mayoral race in the town in Wisconsin.  As both teams gather their funding the amount people working on this small race is very funny.

The cast of the movie includes Mackenzie Davis playing Colonel Hasting's daughter "Diana" and Topher Grace who is an analyst on Gary's team.

The movie is written and directed by Jon Stewart who is the star and the creator of "The Daily Show,"

The movie may not be oscar worthy but it is entertaining. 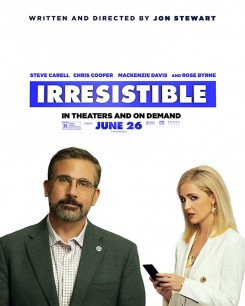