"Greyhound" is the first movie that Tom Hanks has starred since  "It's A Beautiful Day In The Neighborhood".   It is a gritty World War II drama about a ship whose job is to e plot follows a US Navy Commander on his first war-time assignment in command of a multi-national escort group defending a merchant ship convoy under attack by submarines in early-1942 during the Battle of the Atlantic, only months after the U.S. officially entered World War II.

The one thing that made Mom and I sad is that we couldn't see it in a movie theater.  It really is a movie that would play much better in the theater.  The movie was supposed to be released in the theaters in June 12th.  With theaters being closed the distribution rights were sold to Apple TV+.  The story was tough and the battle scenes were intense.

Tom Hanks plays "Captain Krause" the leader of the ship.  The Greyhound goes many different battles defending it's fleet against the Germans.  It is a very powerful movie.

The whole movie was about the battle and The Greyhound making it out alive.  It was very realistic and a refreshing offering this time of this year.

This years Oscars will allow movies that were streamed to be considered for nomination.  Greyhound is a tough movie that hopefully will be considered for this years oscars.  I wouldn't count on it.  I still can figure out how "1917" lost to "Parasite" last year.  I'm a cat so what do I know. 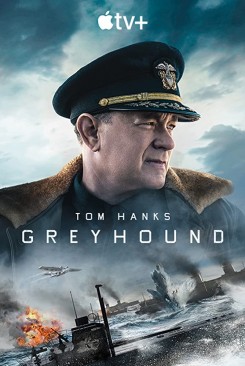